Does Your Starter Have the Power It Needs?

This article was inspired by some dis­cussions about starting problems in several on­ line forums by various car clubs. Often, neither the persons asking the questions nor the persons providing the answers understand exactly how much voltage and current are nec­essary to power a starter. This article explains what you need to do to be sure that the starter is getting the electrical power it needs to generate the mechanical power needed to crank  the engine.

There are several important points to keep in mind. First, a starter is an electric motor that converts electric power from the battery into mechanical  power  that will  crank  the engine. Second, the starter must have sufficient electrical power available in order to generate the necessary mechanical power. And third, it takes a lot of power to crank an engine; the cur­rent required is in the hundreds of amps. Now, to the details.

You need to know some electrical fun­damentals to understand how a starter system works.

In a direct current (DC) circuit, there are three quantities: current, voltage and resistance.

If you know two of the quantities, you can calculate the third by using Ohm's law.

Figure 1 shows a simple circuit. Here a battery provides 6 volts that moves cutTent through a 0.02 ohm resistance. The current is 6 volts divided by 0.02 ohms or 300 amps.

Mechanical power can be converted to electrical power using a generator or alternator. Electrical power can be converted to mechani­cal power using an electric motor. If the con­version could be done with 100 % efficiency, 746 watts would convert to 1 horsepower or 1 horsepower would convert to 746 watts. The conversion cannot be done with 100 % efficien­cy because some of the electrical power is lost moving the electricity through a generator's or motor's electrical conductors, and some of the mechanical energy is lost overcoming friction. The lost power becomes heat.

In the Figure 1 circuit, power equals 6 volts times 300 amps, or 1,800 watts. Since the circuit is a resistor which converts electrical energy to heat, the entire 1800 watts is convert­ed to heat.

Figure 2 shows a starter system consist­ing of a battery, a starter, a starter switch and cables. In order to determine the voltages and current, it is necessary to know the electrical characteristics of the battery, the starter and the cables.

It is difficult to get starter specifications for antique cars. Starters were purchased parts; the automobile manufacturer did not make the starters. Specifications were negotiated between the parts suppliers and the manufactur­ers and were not generally published. I have found specifications for starters made by North East Electric Company (merged with Delco in 1929), Atwater Kent (no longer in business) and Delco-Remy. Since these starters have similar specifications, one of them will be the basis for a 'typical' starter to be used as an example.

These starters were used with 1920's engines of about 200 cubic inches with com­pression ratios of about 4: 1. After determining the voltages and current necessary to power the example starter, I will discuss starters for other engines. 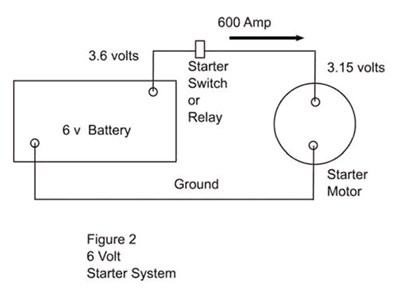 It is important to supply the high current that the starter draws before it starts rotating to allow the starter to develop the high torque to get rotation started. The example starter is rated to draw a current of 590 amps at 3.1 volts with the shaft locked (not rotating). The following calculations are for the peak current condition when the starter is first energized.

Resistance equals voltage divided by current The starter has a resistance of 3.1 volts divided by 590 amps, which is 0.00525 ohms. 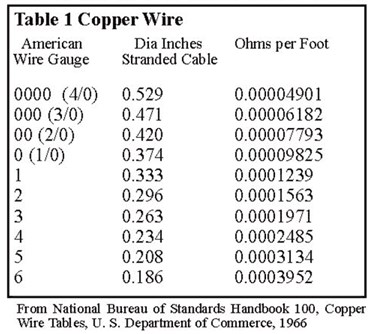 Automotive batteries are designed to produce the large current required for the few seconds usually required to start an engine and are rated for "Cranking Amps." But, when the battery is producing hundreds of amps, its volt­ age will decrease to much less than the nominal 6 volts or 12 volts. The cranking amps rating means that at 32 degrees F, the battery will pro­duce that many amps without its voltage drop­ ping below 1.2 volts per cell for 30 seconds. A 6 volt battery has three cells and is rated to pro­duce cranking amps with at least 3.6 volts and a 12 volt battery, with six cells, is rated to produce cranking amps with at least 7.2 volts. The bat­tery in the example is a 6 volt battery rated for more than 600 cranking amps.

The resistance of the cables depends on the size of the cables and their length. Table 1 shows diameters and resistances of copper wire from 0000 gauge (also called 4/0 gauge) through 6 gauge. Diameters shown are for stranded wire which is usually used for battery cables. Stranded wire is larger than solid wire because there is a small amount of space between the strands.

There are three cables in the example starter system: from the battery to the starter switch (1), from the switch to the starter (2) and from the battery to the ground connection on the transmission (3). In some vehicles, the battery is grounded to the chassis and there is a cable from the chassis to the engine block It is nec­essary to calculate the total resistance of all the cables. The total length of the cables in the example is 7.6 feet and the cables are 0 gauge From the wire table, 0 gauge cable has 0.0000983 ohms per foot. 7.6 feet of O gauge cable has 0.00075 ohms resistance. 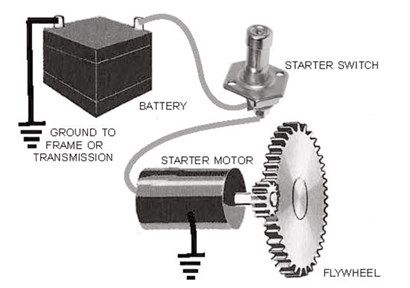 The calculation of voltages and currents is only approximate. Battery voltage and cur­ rent will vary with temperature, the charge state of the battery and the age of the battery. You can use this approximation to troubleshoot the system, with the understanding that it is an approximation. It should be understood that the calculated voltages and currents are for the brief time that the starter and engine are not turning. Once the starter begins to rotate and crank the engine, before the air-fuel mixture is ignited and the engine turns itself, the starter current will decrease and voltages will increase. When the air-fuel mixture in the cylinders starts to ignite and the engine turns itself, the starter will disen­gage from the engine and the current will be shut off

The calculation for total resistance is:

It can be difficult to get starter specifica­tions, and these specifications are needed to cal­culate voltages and cmTents for your starter sys­tem. Here are some suggestions: ask other own­ers of similar models of the same make of car, consult on-line forums for your make of car, consult libraries and archives of clubs. (The starter information used in this article came from the H. H. Franklin club archives.) If the engine is similar to that of the example, the volt­ ages and currents are likely to be similar; how­ ever if the engine is larger or smaller, the cur­ rent can be scaled while the voltages will be about the same, and the cranking amps rating of recommended batteries will be a clue. Since batteries only last a few years, your battery was likely manufactured in the last few years and you should be able to get the battery cranking amps rating from the battery manufacturer.

In the wide world of vehicles with gaso­line and diesel engines, there are starters that do not work as described, but this covers most of them.

Knowing the voltages to expect makes it possible to compare actual voltages with expected voltages. And this will allow isolating the problem. If there is enough voltage at the starter and the cranking is still sluggish, this indicates that the starter itself has a problem. You'll need to either have it rebuilt or replace it. If the battery voltage is low, the battery needs to be either charged or replaced. Caution: operat­ing a starter for more than 15 seconds can cause overheating.

If you need to get a new battery, it's best to find out the locked rotor cranking amps of the starter and buy a battery that will supply that many amps. Locked rotor amps are what it takes to produce the maximum torque to get the engine turning. If you have a choice of batter­ies, the one with more capacity is probably bet­ter, if it will fit. A battery's capacity can be test­ ed by measuring its voltage while operating the starter.

When replacing cables, it's best to know the locked rotor cranking amps. Do not rely on the cables in a vehicle being the connect gauge.

If the vehicle is several decades old. the cables might have been replaced with smaller ones. Smaller cables have too much resistance. and high resistance causes a high voltage drop that reduces voltage and ClllTent for the starter caus­ing sluggish starting. The voltage drop in the cable should be less than 0.5 volts in a 6 volt system and less than 1 volt in a 12 volt system. If you know the locked rotor starting current. you can determine what gauge cable you need using the wire table.

Test the cables by measuring the voltage drop while operating the starter.

Battery cables should not be aluminum. Since aluminum has a higher resistivity than copper. aluminum wire needs to be 2 gauges larger to have the same resistance as copper. It's difficult to make a reliable low resistance con­nection to aluminum wire.

If knowledge is power. this knowledge should help you make sure that your starter is getting the power it needs.

Considering how many times you start your car. day after day. month after month. the starter motor is a pretty reliable piece of machinery. Essentially it is nothing more than an electric motor which is activated when the driver turns the key to ‘START' or steps on the floor starter switch. The motor spins. turning a retractable gear on the end of the shaft. When activated. that gear engages with the teeth of the flywheel and spins the flywheel. moving the pistons up and down and allowing the engine to start on its own. Normally the starter motor requires no special attention or maintenance. 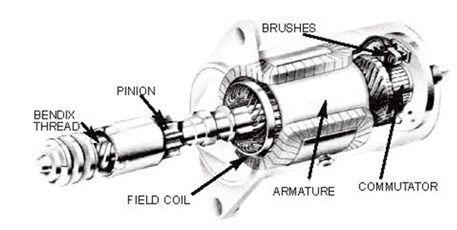 Although the starter motor might experience internal electrical problems – a bad field coil or a damaged armature – most of the prob­lems are relatively simple to repair.

STARTER DOESN'T WORK AT ALL OR GRINDS OR CRANKS VERY SLOWLY 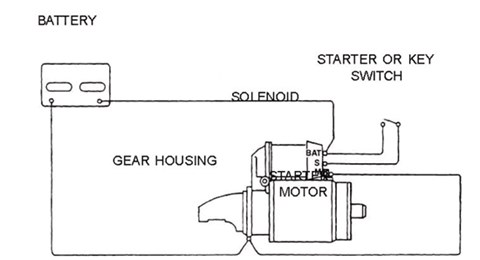 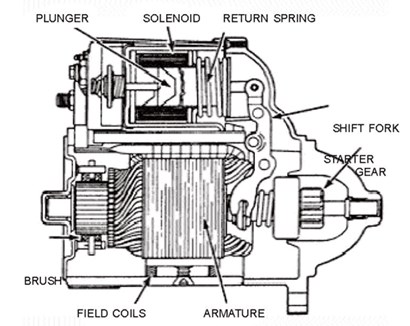 STARTER SPINS BUT ENGINES DOES NOT CRANK 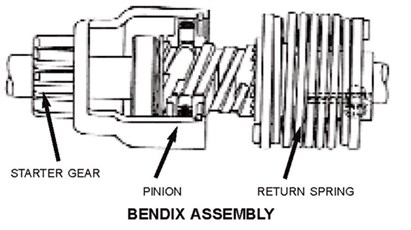 How the Pinion Works 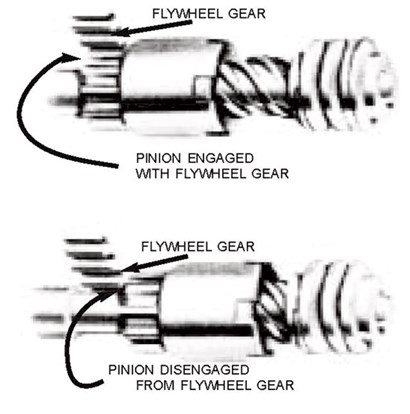 When the starter motor spins, the pinion is engaged and the gear turns the flywheel. When the motor starts, the flywheel turns faster than the pinion and it forces the pinion to slide along the shaft, out of engagement.