The Most Neglected (and perhaps misunderstood) Part of the Car: The Steering Box

“I'm on a crusade to teach people old cars steer well - if they are remanufactured correctly.”

I have been thrown into a steering box re-build situation. The topic is not one of my choosing, nor is it one of which I had any intention of addressing. But I find myself smack-dab in the middle of a steering box rebuild situation. At first, the job was to be handled locally, but then, after the local source fumbled the ball, I sent the steering column and steering gear box to the Lares Corporation.

We are very selective about our advertisers. The Lares Corporation was offered advertising space after we received a number of highly complementary letters and e-mails about their work. Subsequently we received even more ‘atta boys’ about their work. Now it was time for me to test the quality of their work. I’ve gotten to know Paul Lares; he certainly sounds like he knows his stuff. The acid test, though, is how well he can actually do the work. Paul had no idea when he accepted my steering job that I planned on critiquing his work in print. That is an editorial privilege that I retain at my own discretion.

I shipped my 1949 Ford steering column and gear box to Lares for a re-build. Paul did push me up on their normal two-week turn-around timetable, for which I thank him, but the job still required several days for completion. Once the work was done, Paul e-mailed me that he personally ‘road-tested’ the job on the bench. His opinion: “I can tell you it’s considerably better than the one you sent me.”

As I write this, the steering gear is in the hands of UPS; I expect to have it back in a few days, and then it goes over to be re-installed in the car. More after I’ve had a chance to evaluate it.

In one of Paul’s e-mails he made the following comment: “I'm on a crusade to teach people old cars steer well - if they are remanufactured correctly.” Although Lares does rebuild and remanufacture ‘modern’ steering too, his personal love is old, classic cars. He has a collection of classic cars, and living outside of an urban area, is able to drive them regularly. Paul’s comments then are from a collectible car guy, not just a steering-source company.

“This is what bugs me. First, people think old cars steer like crap. No, the engineers back then were VERY sharp. They had to be sharper than engineers today. Because today, you can just add power steering to cover bad design. Back then, you had to maximize every bit of mechanical advantage you could. A properly rebuilt manual system in an old car steers very well with just a little bit of forward movement. You’d be hard pressed to know my 1938 Packard 12 cylinder wasn’t power steering at 5 miles per hour.

“Worse, people think steering is simple. This (your car) is case in point. Either people ignore the steering gear (and other parts in later systems) or they bash it together with no regard for tolerances, hardness, lubrication, or friction. The tolerances in a steering gear are every bit as tight as a engine. In some cases, much smaller. There are power steering applications with tolerances of .0005”. Any larger and it won’t work. And that’s when you get into hydraulics, fluid flow patterns, volumes, pressure differentials, seal design and on and on.”

I had given the Lares Corporation full rights to do whatever they felt the rebuild job required. I did not ask for estimates on labor or parts. I wanted the job done right, and if it required replacement parts, then I wanted them to go ahead with the job without having to ask me each step of the way.

Paul kept in touch with me via e-mail:

“As I thought, we had to replace every-thing. We are returning all the old parts.

“In addition, we added a bracket that was missing. I’m not sure what it’s for, but it’s a tab on one of the 4 bolts that holds the sector shaft housing to the case.

“The other guy also had the input cover in the wrong orientation. There is a small tab that slides into the steering column. We put it right.

“It’s filled with grease and properly adjusted. There is a yellow line (which we put) on the sector shaft and the case. Make sure the installer doesn’t move it. Adjust everything in the front end to match that yellow line. If they don’t keep the line on the sector shaft lined up with the case, it will be sloppy.”

Filled with ‘grease’? I thought that an 80 or 90 weight gear oil was the standard. Back in July 2017, Skinned Knuckles did an article of the correct lubricants for various parts of the car or truck. I’d like to reprint a portion of that article - the section that dealt with the steering gear:

“Next, the steering gear box. At one time engine oil was the recommended lubricant, but steering boxes leak. It’s a nature of the beast. Today an 80 or 90 weight gear oil is recommended. It, too, is going to leak out all over the garage floor, but more slowly than a 30 weight engine oil. Ideally the best lubricant for a steering box is a special grease. But to properly lu-bricate the mechanism, the grease has to be packed around the gears and upper bearings. Just filling the steering box is not adequate.

“According to Paul Lares of the Lares Corporation, when they rebuild a steering gear box it is completely disassembled, cleaned, worn or damaged parts replaced, and then repacked with a special grease which has special polymer additives to minimize separation of the lubricant. Only through repacking the gear box can the grease get to where it is needed. Power steering systems are a totally different story and require a lighter lubricant like transmission fluid or power steering fluid.

“But what do you do if your manual steering gear box does not need rebuilding?First of all (again, according to Mr. Lares) most of the steering gear problems occur because the upper bearing wears. The steering box is prob-ably the most neglected part of the car. People just don’t check it, yet, as stated, the oil does leak out. And gravity takes over and carries whatever lubricant there is to the lower part of the gear box (and sometimes out through the sector shaft) leaving the upper gears and bearings dry.

“Make the steering gear box part of your normal under-the-hood maintenance. Top off the lubricant with 80 or 90 weight gear oil, and if it leaks, check it regularly and add gear oil as needed. It will save you a lot of money.”

My car had some serious steering box wear; very strange for such a low mileage car. I’ve asked many people for their opinion of why it should have experienced such aggressive wear. The answer, from most everyone knowledgeable about steering: Lack of Lubrication.

The car had been sitting for an extended period of time, I believe. The seals probably dried out, and the gear oil lubrication leaked out - it was probably a gear oil of 80 or 90 weight. Assuming that the car was driven without lubrication, extensive wear would be normal. The same explanation (or guess) would go for the kingpins.

Paul continued with his explanations:

“And just like a rear end, if you see leak-age, you need to add lubricant or bad things happen.

“Like a rear end, a steering gear does not need to "wear in". That's not saying other front end components may not need to wear in.

“It is not the steering gear changing. The gears are all hardened steel and do not change with proper lubrication. Any change would come from other front end components.

“With steering gears, the problem is that the adjustment screw is easy to get at; easier than proper diagnosis. People just grab a screw-driver and tighten it up. And it might help for a while because it creates a binding condition masking the real problem. But as the fellow continues to drive, the underlying problem gets worse, and because the steering gear is now too tight and binding, serious damage can happen inside the steering gear as well. Just like making the backlash between the ring and pinion too tight.

“Further complicating things for well intentioned mechanics, many manuals talk about adjusting the steering gear once or twice in the car’s lifetime. Theoretically I suppose that's true, but here in the real world looking at gearing that's 50-75 years old, I can tell you that with proper lubrication wear simply isn't something that happens. How often do you need to change the backlash on the rear end of an old car?

“As I've mentioned before, the upper bearing and race are the first to wear in a steering gear because they are the first to be exposed as the lubricant drips out and onto the garage floor. It’s not the backlash between the worm and sector shaft. Tightening the adjustment screw won't put that material back on.” 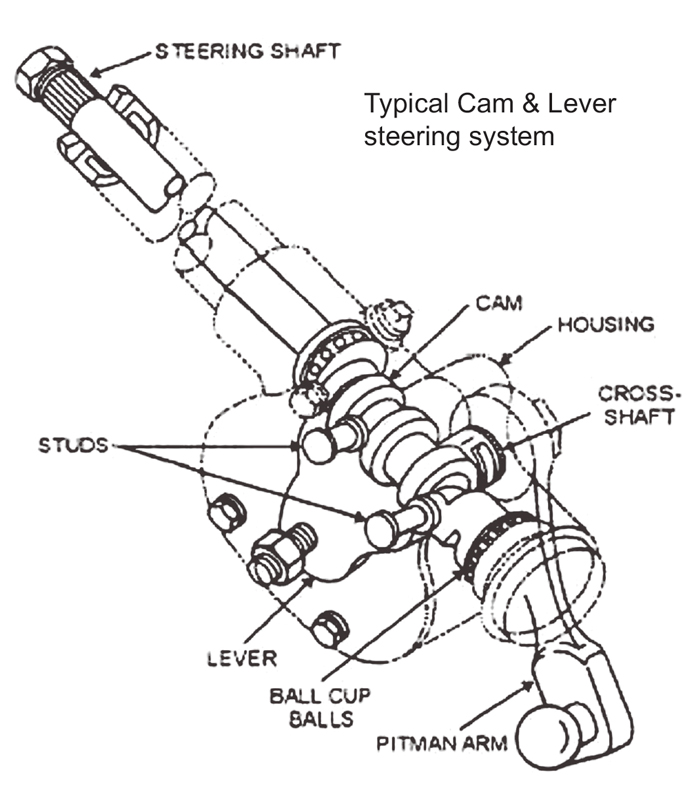