Similar but not the Same

The Model T Ford Coil and its Ignition System

One of the many fascinating design aspects of the Model T Ford is its ignition system which consists of a separate, easily removed sparking coil for each cylinder and a 'timer' that is driven directly off the end of the camshaft and which selects the appropriate coil for the cylinder that is about to fire. This timer is vaguely similar to a more conventional distributor, except that it is operating at low voltage rather than at spark plug voltage as in a Kettering system (which is simply the much more familiar high tension distributor with points) or a high tension magneto. One other major difference is that both the Kettering distributor and high tension magneto need to be moving (I.e. the engine must be turning) for any spark to be generated. The Ford 'T' coil, when selected by the timer, will give a continuous shower of sparks. This has the advantage that if the engine is really worn and has little compression, there is a good chance that it will still run.

During the years when the Model T Ford was very commonplace, the coil was known by many names (some not very polite when they were misbehaving) but the most common of these is 'buzz' or 'trembler' coils.

The Ford coil is a very close relative of the classic induction or Ruhmkorff coil, and as such has its origins in the early 1800s. There is a story that Thomas Edison possessed one when he was a teenager and enjoyed giving unsuspecting people rather nasty shocks because it is essentially a transformer that 'steps up' the low voltage of a battery (six volts or so) to the very high voltage required by the spark plug (around 12,000 volts or more). Your typical 'wall wart' transformer that is used for charging your cell phone or such is doing the opposite: dropping the house line voltage down to the very low voltage for th ephione's battery management system. 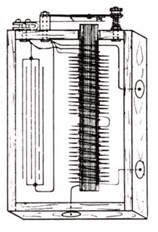 The complicated part of all this arises when one realizes that the power supplied by the car's battery is Direct Current which cannot pass through a transformer. The answer to this was to simply use the primary coil to generate a strong magnetic field in the iron core to open electrical contacts which in turn interrupt the primary current, and thus the magnetic field collapses allowing the contacts to come together again and start the whole cycle anew resulting in an on-off-on-off oscillation. This oscillation is effectively an alternating current which is exactly what a transformer requires to do its job of stepping up the voltage.

To fully explain the function of the capacitor is beyond the scope of this article, but suffice to say that it is exactly the same job that the capacitor in a Kerrering distributor does: increases the output voltage somewhat and reduces burning of the points.

When the Ford coil was factory-new it would have been constructed with the best quality materials that were then available. Unfortunately for us, the insulation that was used on the wire and in the capacitor was not very good 100 years ago, and age has deteriorated it further. So, when your Ford is hard to start, runs roughly, won't idle and lacks power it is quite likely the fact that the coils are really struggling to function even though they may be buzzing quite happily. The really need to be rebuilt.

In a car that has either the usual Kettering distributor or a magneto the spark is generated by a 'centralized' high voltage source which is then distributed (hence the name 'distributor') to the appropriate spark plug. Carefully synchronized with this is the set of contact points that is doing the make-and-break work that actually causes the spark, but it is doing so at a very precise time at each compression stroke. The Ford has totally different arrangement called a Timer.

The Timer is operating exclusively at the low voltage that is required for the primary windings of the coils and, as there is a separate coil for each clinger, there is no need to 'distribute' the high voltage spark. 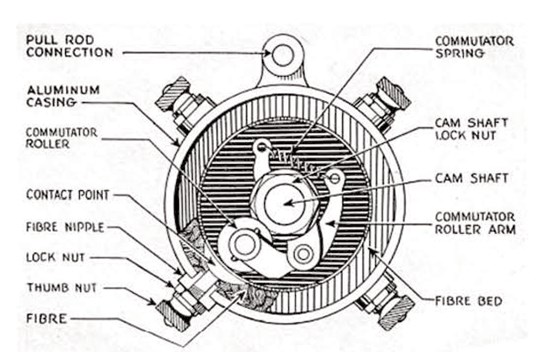 Like many parts of the Ford car, the Timer is a very simple device that, given even minimal maintenance, will perform flawlessly for many years. It is simply a roller that is rotated by the engine's camshaft around the inside of a cap that is deceptively like a distributor cap. As it rolls across each contact, the connected coil is powered and consequently starts buzzing giving a shower of sparks. Obviously as the engine spins faster this shower is for a shorter period of time. But as the Ford engine is not known for its high rate of RPMs this is not a problem. 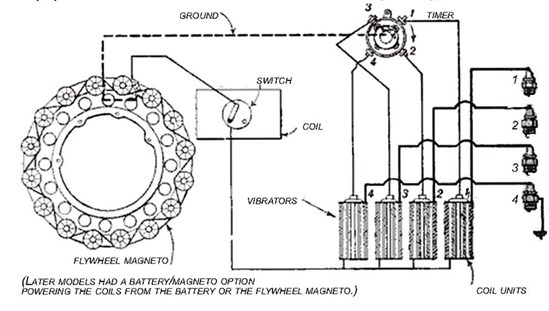 The only maintenance that a Timer requires is the occasional drop of light oil and to be wiped free of dirt and grease as well as ensuring that the electrical connections are tight.

The Care and Feeding of a Ford Coil

Like any electrical device the Ford coil should be kept clean and free from oil, grease, finger oil and any other foreign pollutants.

The coils are stored in a dedicated box that is equipped with spring contacts that simply press up against metal buttons on the coil's wooden case. It is wise to keep these clean and dry by simply wiping them down with some kind of solvent solution at least annually.

The contact points occasionally need to be filed and regapped. According to a 1917 book on Ford maintenance by The Pitman Press the gap should be the thickness of a thumbnail (seriously) but a better measurement would be 0.020" to 0.025".

One potential problem with Ford coils that is not immediately obvious is that contacts made by different manufacturers could well have different strength springs. This will - or at least can - make a huge difference in the gap that is needed for maximum performance. The only real solution is to ensure that all contacts are matched as closely as possible and failing that, try adjusting the gaps 'by ear', i.e. tune them for the same sounding 'buzz'.

Like any car, that wants to give trouble, the Ford will give symptoms that are misleading. Just remember that 80% of all carburetor problems are electrical. A full troubleshooting guide is beyond the scope of this article but a few tips to remember are:

We generally suggest that the car's owner undertake most repair and restoration jobs himself, but the Model 'T' Ford coil requires special knowledge, special equipment and special material to be properly rebuilt.

We strongly recommend that you contact Ron Patterson, The Coilman, if you are having difficulties with your Model 'T' ignition system. He has the knowledge, the equipment and the expertise to do the Jon properly. Or he may advise you to make certain adjustments before sending him the coil(s) for rebuilding.

Give Rob a call. He is a nice fellow to talk to, and he certainly knows his Model 'T' Fords' electrical systems.